I’m on an owl “kick” right now, I admit.  I just loved these owl paper party bags that I made for my daughter’s rainbow owl party.  I saw the idea on Pinterest, and wasn’t sure if I was going to have time to make them, but one day as I was waiting for someone to come over, I just stood at the table and punched out circles….here’s where your (large collection of) crafty punches really come in handy!  It was really quick, but sooo cute!  I just stood there and glued together different combinations of eyes. I used 3 circle punches, a scalloped circle punch, a heart punch….uh, ok, that was a lot of punches….but if you have them all, and in one basket anyways…it’s quick to do.

Brown paper lunch bags….I love using them.  When they are laying flat, just cut through all layers and make a point on the bag, then fold over and down to one side…very simple.  I just cut out a simple shape from purple tissue paper and glued on for the tummy, then glued on the (pre-glued) eyes and beak. 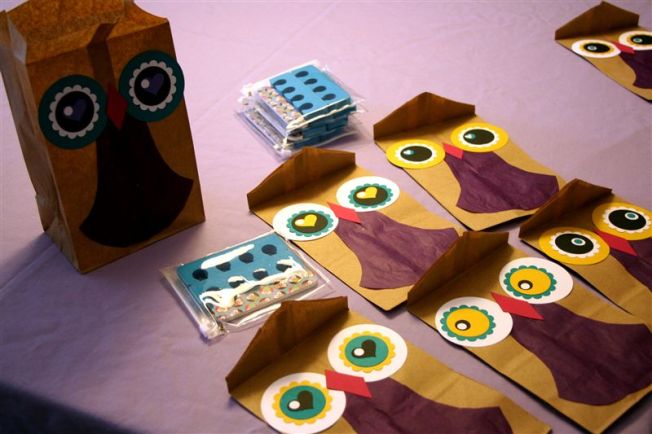 At Michael’s in their little bargain bins, I found the cutest mani/pedi kits to put in the bags…along with some bags of Skittles….

Once the bags are filled, you can close the top with some tape (on the inside) or a staple (would hold better).

It was fun to add the hearts to the eyes!

I’m almost embarrassed to say it, but we still have our Christmas tree up (that’s a record for us!), and to make it just another piece of the party decorations, I added one of the paper bag owls to the top!! heh, heh.  (You can tell that the tree’s been up through Valentine’s Day, too….)

for more party ideas, see my other post: https://dennasideas.wordpress.com/page/2/

We’ve been gearing up for awhile for my daughter’s birthday party…visions of rainbows and owls danced in our heads…(that means we’ve been looking at lots of ideas on Pinterest, and it just happens that we both like rainbows and owls, two popular fads right now).  Here are some pics of the party, and later I’m going to post some “how to’s”.  (Right now I’m visiting my parents and my sister and her family…and brand new baby Micah!)

Don’t rainbows just make you feel happy?!  Even just seeing these rainbow balloons on the banister cheered me up every time I saw them!

The rainbow and owl fun started off with invites that we digitally made and had printed as photos.  I made a rainbowy banner (that also had some small owls on it!)

Days before the party, the kids were busy assembling paper owls….the cutest little things….from this site: http://www.3eyedbear.com/2011/01/14/owl/  we printed out a bunch in different colors.  I just love them! 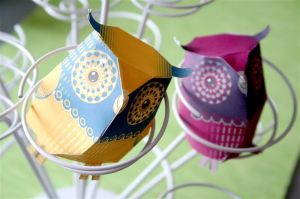 I tried to find as many bright things as possible for the table setting. 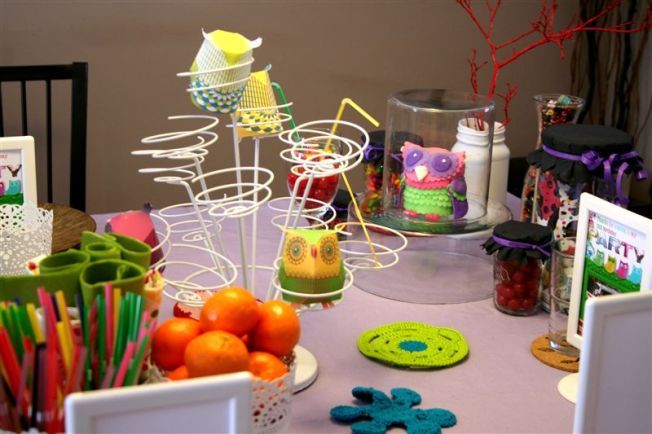 Even one of the presents was wrapped in rainbows!

I just had to make these owl treat bags…the eyes are either super cute or slightly spooky….but I loved them!

We had to “taste the rainbow” so of course Skittles candies had to appear somewhere. I put candy into mason jars and  covered the tops of them with napkins (cut the edge into scallops) and tied on with ribbon. 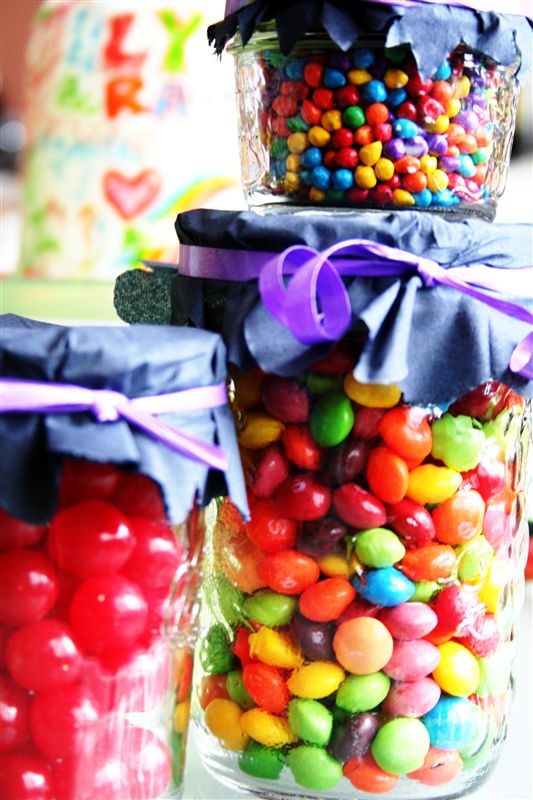 After punching out a bunch of tiny owls from patterned scrapbook paper, the scraps were so cute I didn’t want to throw them away, so I stuffed them all into a large pickle jar….it looked cute and matched so nicely with everything and was large enough to make a statement (I had to fill a smaller jar with the candy…that didn’t give enough “punch for the penny”! -I think I made that up…-) 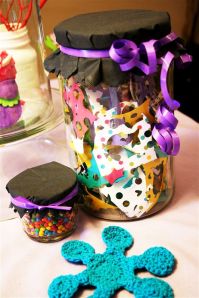 The centerpiece was the cake….I covered the cake in white fondant, and made a little owl for the top:

and then, one of the activities of the party was to have the guests “decorate” or more accurately, graffiti the cake! 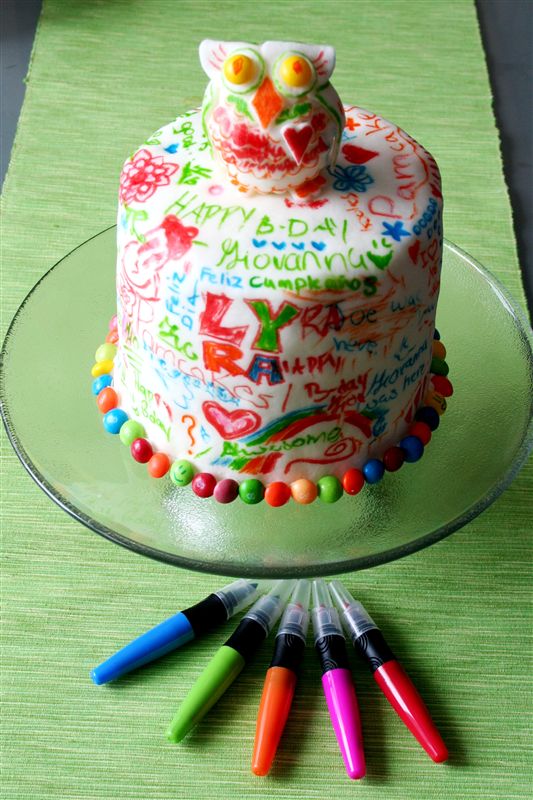 Everyone had fun writing on the cake with edible markers! 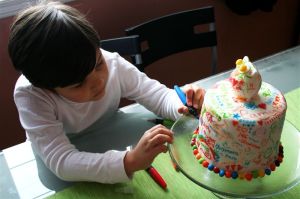 It was pretty spectacular, I must say!!!  I found the idea here:  http://sweetapolita.com/2011/04/rainbow-doodle-birthday-cake/ I guess when it’s a little kid’s party you can call it doodling….when it’s for tweens…graffitied seems more like it!!

but the best part was hearing the gasps when the cake was cut into!

I am going to post some of the step by step pics about the rainbow layer cake later…with some of the extra batter, I made quick cupcakes, they were more for decoration….and owl toppers out of paper:

I’m afraid the birthday girl was sick, so to not spread her germs around by blowing out her candles, she waved them out (more like karate chopped them out!) oops, didn’t have a photo of that, but here’s another one…. 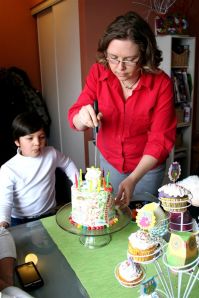 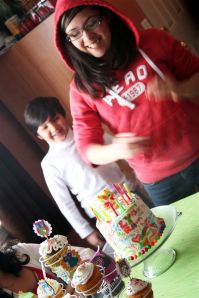 yay! the best part is always pleasing and surprising the kids! 😉