There are a lot of cute ideas for kids’ food and lunches out there.  Sometimes they look overwhelmingly difficult to put together….or maybe they all do.  But really, with just a little extra effort, food can really be made to look, well, FUN!  I think the coolest and craziest party food we had was the Giant Octopus swimming in Dip!!  It took about 10 minutes to put together, but looks fabulous!  All you need is 2 orange bell peppers, something for eyes, like black olive slices and dip!

In my all-time favorite, the dollar store, I had found some blue plates and a blue bubbly bowl and polka dot cup, $3.50 for all.  These were used for 2 “cake” stands.  Just stick ’em together with a bit of hot glue….so far they’ve been through several (hand) washings and different uses.

I put a little battery operated “tea” light under the octo, to look like we were cooking him!! 😉

So cute!  And then there were goldfish crackers, of course….

And end-of-the-season plates and napkins that were on sale….that’s why it’s good to do a party “out of season”, you can find great sales!!  (I ended up doing a “summer” party theme in the fall, but the stores are still selling off their summer stock!) 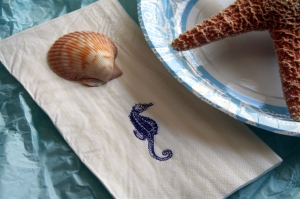 I had wanted to make crab croissant sandwiches, but the croissants we had were straight and not curved, so last minute our sandwiches turned out to be little clams with just their beady eyes showing (reminded me of the clams from the original Alice in Wonderland Disney cartoon!! heehee)

We ended up having a mermaid party weekend, so what I didn’t get done for the first party, I worked on for the next day, but I’m posting it all together to make it look like I actually had it all together.  So here are the super easy crab croissants!!

gotta love them! and their easiness to put together!  filled with butter or herbed cream cheese.  Eyeballs are herbed cream cheese mixed with grated mozarella to make little cheese balls with a sliced black olive stuck on.  Legs are green snap peas sitting there, and the claws are strawberries (or could be red bell peppers). 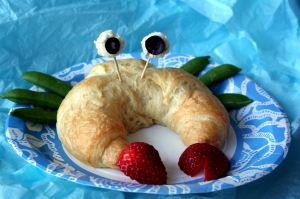 Along with the food, we had goldfish guts punch!  Ginger Ale with orange juice ice cubes and one drop of blue coloring! 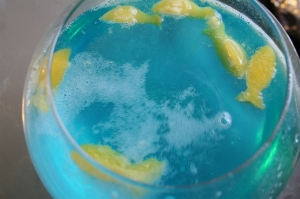 The food was fairly easy to put together, little kids are usually happy with fairly simple stuff…veggies and dip, plain sandwiches 🙂 I just love trying to give it that extra little twist, though!

and then there was some cake!  This is the mermaid cake topper…..which eventually ended up on a cake…(my original idea had been to make one of these little mermaid cakes for each guest…but ran out of time!!  I would love to do that someday-for someone=make the individual mermaid (or dolly) cakes for someone elses’ party-hint*hint* contact me if you like that idea!) 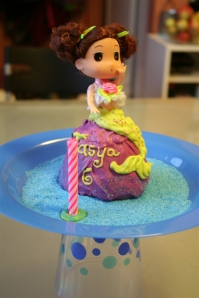 And these are some starfish candy pops….which weren’t actually handed out….I figured none of the parents would be upset if I didn’t give their kids a pure sugar coated candy pop…..what do you think? 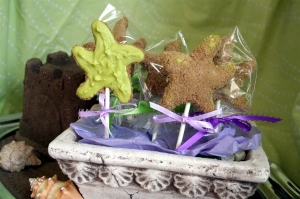 Fun, food and mermaids, it was a swimmingly mermaidy party.  🙂

What do you think? Que piensas? Cancel reply